Energy and mining stocks are underperforming

After a three and a half year run from the bottom in October 2002, the stock market finally decided to take a breather. A correction started in since May 2006 and is now about 10% lower. Resources and mining stocks, having led this market up, are leading it down for the moment.

One troublesome observation stands out from the observed data: energy and mining stocks are underperforming their respective commodities. Since the market is a leading indicator, is it telling us something about the future of commodities?

The following table summarizes the price performance of the main indices for the second quarter and the first half of 2006.

The Fed funds rate (the barometer of interest rates in the US) has risen from 1% to the current 5.25%. The European Central Bank, fearful of potential inflation, has also boosted its rate. The Bank of Japan announced in March a major change in its monetary policy, abandoning the zero-rate policies that have been in place for several years and going back to charging interest on borrowing. i.e. raising rates. The People’s Bank of China followed swiftly by boosting its reserve requirements that have been unchanged since April 2004. What these developments mean is that all four central banks of the world’s major economies are in cooling mode. They are imposing policies designed to fight inflation by slowing down economic activity and reining in exuberant financial markets.

The US Dollar continues to lose value versus its counterparts. It currently stands at approximately CAD 1.1236 and EUR 0.7812. Notwithstanding some minor fluctuations, we believe that the American currency will stay weak for the foreseeable future.

Now that the World Cup Soccer is over, the global economy will probably pick up some momentum. Research has demonstrated that productivity in Europe stalls during this international competition every four years. Apparently, even terrorist activities slowed during the civil war in Lebanon when a World Cup Soccer game was on …

Over the last 30 years, finance professors and other academics have developed modern portfolio theory based on the assumptions that investors are rational, dispassionate and understand the odds. Unfortunately, fifty years of financial evidence and behavioral research contradicts these assumptions.

Behavioral finance is a new discipline that attempts to define the way investors actually make choices. Researchers have found that in reality, people regularly violate the basic rules of rational decision-making.

We contend that investors are their own worst enemy when it comes to achieving investment success. When trying to make decisions under uncertainty, they fall back on their own worst impulses. Fear, greed, ignorance and hope rob us of our ability to make sensible, intelligent decisions about the market. We have read recently some very good books on behavioral finance and quantitative investing and we would like to share some interesting ideas with you.

In order to make the topic entertaining, let us start with some tests and surveys. They have been used in different research projects to try to determine how investors make decisions. For those who can’t wait, the results are summarized later in this letter. 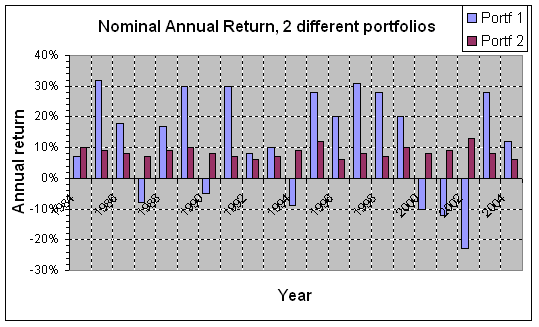 In the following graph, which portfolio is more attractive to you? 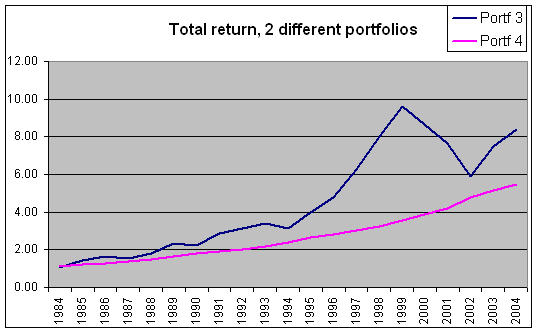 Results of the surveys

What’s in it for us (what can we learn from this research)?

Nobel laureate Daniel Kahneman says: “…The biases of judgment and decision making have sometimes been called cognitive illusions. Like visual illusions, the mistakes of intuitive reasoning are not easily eliminated…. Merely learning about illusions does not eliminate them”. Such is the state of human beings – even though we know and understand why we make the investing mistakes we make, we are destined to repeat them. Neurobiologists notice in the PET scans of our brains that, when making decisions under uncertainty, the rational part of our brain is mostly dormant but the emotional part fires away!

Now that we know that investors’ behavior can often be best described as bipolar – overly timid, risk-averse on the one hand and overconfident and optimistic on the other –, having a guiding, quantitative and unemotional system might be the only way to overcome the enemy from within and successfully guard against making the same mistakes over and over again.

We hope you have enjoyed the surveys’ questions and results.

Can Stocks Protect Against Inflation?