While the markets finished the quarter on a positive note, the ride was certainly a bumpy one. Volatility this quarter was caused by two events: Chinese authorities tightening monetary conditions, and subprime loan problems in the United States.

As the following table indicates, the Canadian and European markets finished the quarter on a positive note, while the US and Japanese markets were basically flat in their respective currency.

At the end of February, comments by Chinese authorities regarding local stock market speculation resulted in the Shanghai Index dropping by 10% in 1 day. The results of this drop were clearly felt around the world. While the drop was swift and severe, we would like to provide you with some background information to put this event into perspective.

The Chinese economy put in its best performance in the last 12 years. With growth in gross domestic product coming in at 10%, the Chinese monetary authorities were forced to tighten monetary conditions by increasing capital requirements in an effort to slow down the economy and prevent overheating. The Shanghai Index had just increased 140% over the last 12 months. No wonder investors were on edge after this speculative run. While the market has since made new highs, given the feverish speculation taking place, we prefer to remain on the sidelines as spectators and commentators.

The global economy appears to be firing on all cylinders. Over the last 30 years, the past three years have produced the strongest economic growth worldwide. Globalization has been an important factor in producing this growth and is also causing major headaches for central bankers who try to control economic growth and prevent their economies from overheating.

They say money is the lifeblood of war. We can also add that money is the fuel that drives economies. In an attempt to control economic growth in the United States, the Federal Reserve has tried to limit access to money by increasing US interest rates. After 17 increases in interest rates from 1.00% to 5.25% by the Federal Reserve, economists are still waiting to see an economic slowdown.

Two factors directly related to globalization are currently acting against the Federal Reserve. Firstly, globalization is facilitating access to capital through foreign markets. Financial market participants can easily borrow money outside of the United States. Secondly, China and Japan, which are laden with US dollars because of international trade with the United States, have to invest somewhere. Both factors have resulted in interest rates remaining low and thus permitting companies and individuals access to “easy money”.

Now that we know that the global flow of funds has created significant growth globally, what does the future hold? Generally, financial ma rkets that depend on easy access to credit to grow, create a runaway market, a bubble, with an eventual collapse. While no one has a crystal ball, certain sectors are more susceptible to a correction than others. As with the Internet bubble, what tends to shoot straight up eventually tends to come back down.

As illustrated in the accompanying graph, the soaring price of materials during the quarter helped move the Canadian market higher. Will this trend continue? While it’s impossible to predict, we should remind readers that natural resources and raw materials are often referred to as cyclical for a good reason. Even in the context of globalization and sustained growth, we are not willing to bet that “this time it’s going to be different”. 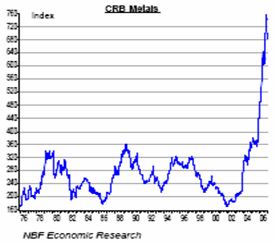 Globalization will not take place smoothly for all industries. Just ask the participants in the North American textile industry for their comments. The greatest threat to globalization is the resurgence of protectionism. In Thailand for example, the local currency appreciated dramatically, this immediately had a very negative impact on the country’s exporters. Thai authorities responded by imposing a tax on short-term investments. Shocked by the news, the Thai stock market immediately dropped 15%. Going forward, we need to be vigilant as protectionism is generally an enemy of economic growth and encourages inflation.

All is not well in the American subprime mortgage market. Will this lead to a real estate crisis? Increasing US interest rates for subprime mortgage borrowers has made mortgage payments more expensive for certain homeowners. The time required to sell a house has increased year-over-year and home prices are no longer increasing on a monthly basis. As with any situation which is a little out of the ordinary, we can always find pessimists who are willing to predict some catastrophic scenario. Will this problem spillover to the prime mortgage market? Let’s put the situation into perspective. Everyone remembers the US “ savings-and-loan crisis”. At the end of the 1980s, the savings-and- loan crisis cost Americans $150 billion at a time when the US gross domestic product was approximately $6 trillion. Presently, the US gross domestic product is approximately $13 trillion, therefore, on a comparable basis, the crisis would need to be around $ 325 billion. Currently, the damage in the subprime mortgage market is approximately $100 billion. While it is certainly possible that the current subprime market crisis may spillover to the prime market, what has changed is that subprime loans have been financially packaged so as to spread the risk throughout the financial system. Basically, securitization, which consists of packaging many subprime mortgages together and selling them to third parties, will limit the risk to the financial services industry. At the end of the day, the two groups that are the most impacted are the subprime homeowners, who maybe couldn’t afford to buy homes in the first-place, and the investors, who chose to purchase these mortgages at interest rates that are meant to compensate the risk taken and come close to usury. A further fall out remains to be seen. Will consumers reduce their consumption as their net disposable income decreases? This would weigh heavily on economic growth. It is reassuring to note that in a release from the Federal Reserve dated March 27, 2007, the Fed clearly indicated that they were favorable to increasing the proportion of homeowners, which is favorable to the real estate market in the long-term.

We would like to revisit the topic of behavioral finance, which has been receiving a tremendous amount of attention in academic circles and awarded several Nobel prizes. This scienc e consists of studying an individual’s behaviour when making financial decisions. Historically, economists believed that all individuals were perfectly rational and logical when making financial decisions, but recent studies have proven otherwise.

Today, individuals have been tested using MRIs while making financial decisions. The researchers have proven that economic decisions are guided by two factors. The first factor is located in the region of the brain responsible for emotions. The other factor is found in the well-developed section of the brain responsible for rationalization and related to bettering one’s own economic situation.

The economic theory of mathematician John Nash would predict that A would give the minimum amount to B, being one dollar bill. Participant A would maximize their gain and B would be better off than with no dollar bills.

We at Claret believe that emotions will ultimately cost the investor money. Recognizing the emotional level in the stock market is quite difficult. Emotions create ups and downs and bubbles that burst. If you are not rational it is easy to get caught because we are both greedy and fearful at the same time.

All of the recent studies lead us to pursue research on investment models that are based on a rational decision making process. Noise or pollution based on emotions or “feelings” need to be removed. The purpose of these investment models is to lead us to maximize the economic outcome, the results. At the end of the day we make more money being logical than emotional.